Ahead of BJP meet in Allahabad, poster war around venue 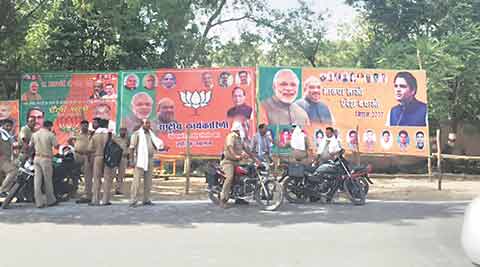 A poster of Modi, Shah and Varun Gandhi in Allahabad Saturday, a day before the BJP national executive meet

A ‘poster war’ in which BJP MP Varun Gandhi seems to have the lead could overshadow the party’s two-day national executive meet, meant to sound the poll bugle in Uttar Pradesh and highlight the Centre’s achievement in the last two years.

The BJP leadership seemed keen to downplay the posters, though privately, some leaders feared this could dilute the conclave’s message.

“No one becomes a leader by putting their posters. Leaders who have become BJP’s chief ministers, be it Devendra Fadnavis, Manohar Lal Khattar or Raghubar Das, were not leaders on posters,” BJP general secretary Arun Singh said.

Indicating the leadership’s unhappiness over posters featuring Varun, a senior leader said, “You cannot have your
face larger than top leaders. There is a hierarchy and a disciplined party member has to keep that in mind.”

Singh, too, cautioned: “One has to be balanced. It has always boomeranged.” According to Singh, the BJP officially sanctioned pictures of Modi, Shah, Parliamentary board members, CMs, state presidents and Margdarshak Mandal members for posters.

On the billboards, Varun is seen sharing space with Modi, Shah, Home Minister Rajnath Singh and fellow MP Poonam Mahajan. While there is no demand to project him as the CM candidate, there are slogans like “Gundagardi na bhrashtachar, abki baar BJP sarkar — Mission 265.”

The leadership is also learnt to be unhappy that Modi’s bete noire Joshi, Sinha and party veteran Murli Manohar Joshi have found space on posters. A poster with Joshi’s photo even suggests he has been ignored by the BJP leadership.

Also in town are huge banners of Union Minister Smriti Irani and party MP Yogi Adityanath, whose names were doing the rounds as possible CM candidates.

One general secretary, when asked about the posters, said, “It is irrelevant. The BJP has not put up any of them. It could be that their supporters put them up.”

But he admitted that the move could “backfire”. “BJP’s CMs or campaign leaders are decided at the parliamentary board meeting,” he said.