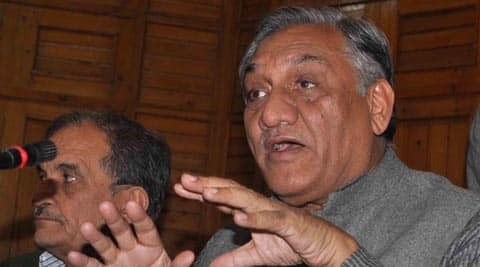 Vijay Bahuguna, along with eight Congress MLAs, had formally joined the BJP on May 18 after rebelling from Harish Rawat-led government in Uttarakhand. (Source: file photo)

Former Uttarakhand chief minister Vijay Bahuguna, who had rebelled from the Congress and joined hands with the Bharatiya Janata Party (BJP), has been inducted in to the saffron party’s National Executive.

Bahuguna, along with eight Congress MLAs, formally joined the BJP on May 18 after rebelling from Harish Rawat-led government, which had led to a major political turmoil in Uttarakhand.

The nine Congress MLAs had rebelled against the Rawat government on March 18, resulting in a flip-flop in the passage of the Appropriation Bill. They were subsequently expelled by the Uttarakhand assembly Speaker.

As the nine MLAs defected from the Congress, the state government was considered having slipped into minority and President’s Rule was imposed.

However, the Centre revoked President’s Rule on May 11 after Rawat proved his majority on the floor of the House.

Eat The Fat Off

Foreign aid: Who will be hit by the UK government cuts?