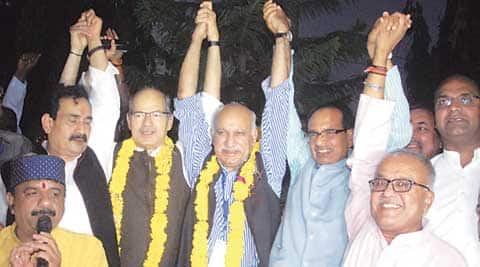 The ruling BJP in Madhya Pradesh won two Rajya Sabha seats Saturday, but failed to get a party leader, who contested as an Independent, elected.

BJP leader Vinod Gotia got 50 first preference votes, but fell eight votes short of the magic figure of 58. His rival, noted lawyer and Congress nominee Vivek Tankha, got 62 votes, five more than the Congress tally of 57 in the Assembly. Tankha got four votes from the BSP and one from an Independent MLA.

The victory of the other two BJP candidates M J Akbar and Anil Madhav Dave was never in doubt as the BJP has 166 MLAs in the 230-member House.

In all, 228 MLAs voted Saturday, including Leader of Opposition Satyadev Katare, who voted using a postal ballot.

Congress’s Jatara MLA Dinesh Ahirwar, who the BJP claimed had switched his loyalty, also voted for Tankha. The BJP later claimed that Ahirwar’s support would not have helped it win the third seat, so he voted for the Congress to save his membership.

Most Congressmen spent the Friday night together at a hotel in the state capital. Former Union minister Kamal Nath said the Congress had sworn itself to “clean politics’’ and the victory was a vote against the corrupt order of the BJP in the state. Nath, who has been camping in Bhopal for the last few days, said the BJP government thrived on sloganeering.

Tankha claimed that BJP tried everything it could to stop his entry to the Upper House as he had appeared in several legal cases against the BJP governments at the Centre and in MP.

“I will show them the might of law,’’ he said, adding that his win had given momentum to Congress ahead of the 2018 state polls.

However, his victory speech at the state Congress office showed the party continued to be a divided house.
He was interrupted by a supporter who asked him why he had not mentioned former Leader of Opposition Ajay Singh in his speech. Apologising, Tankha said he had named Singh in his comments to a news channel.

After assembly poll results, politicians compete to become opposition Neta No 1. A conversation that wasn’t

Tokyo 2020: The Japanese city that’s rooting for South Sudan at the Olympics

Tokyo 2020: The Japanese city that's rooting for South Sudan at the Olympics