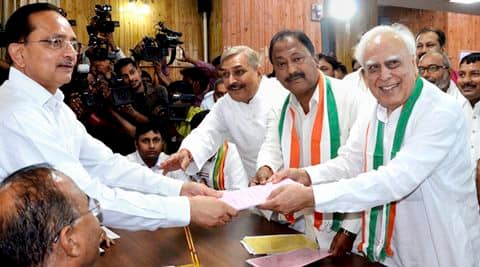 The results showed that BSP, which had backed Congress RS nominees in Rajasthan and Madhya Pradesh, chose not to transfer its surplus votes to any other party candidate in UP.

Besides Sibal, the others who made it to the Rajya Sabha from the state are two recent returnees to SP-fold Amar Singh, Beni Prasad Verma, Kuwar Rewati Raman Singh, Vishambhar Prasad Nishad, Sukhram Singh Yadav, Sanjay Seth and Surendra Nagar (all SP), Satish Chandra Mishra and Ashok Sidharth (both BSP) and Shiv Pratap Shukla (BJP).

Although Sibal got through, the 29-MLA Congress suffered a jolt with Sibal getting only 25 first preference votes despite 8-member RLD committing four votes each to Congress and SP.

There were 12 candidates for 11 Rajya Sabha seats in UP and to secure a seat in Rajya Sabha, a candidate required 34 votes.

Although SP managed to ensure victory of all its seven candidates, only three were through in the first round of counting, relecting that the contest was close for the ruling party.

Bahujan Samaj Party chose not to transfer its 12 surplus votes with it two candidates S C Mishra getting 39 votes and Ashok Sidhharth 42.

The last-minute entry of Preeti Mahapatra, wife of a Mumbai-based businessman, in the fray which forced a contest, managed just 18 first preference votes and conceded defeat even when the counting in further rounds was on.

Climate change: How rich people could help save the planet

Climate change: How rich people could help save the planet